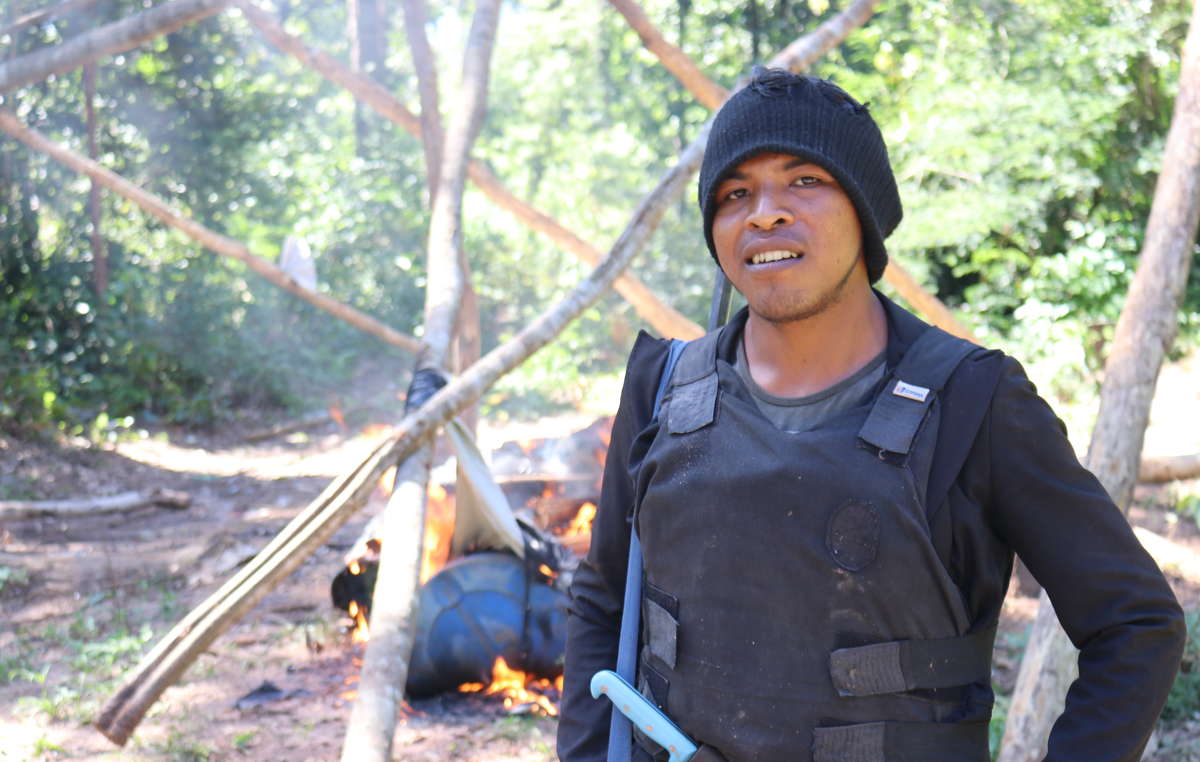 An indigenous Amazon Guardian has been shot dead by loggers and another wounded after they were ambushed by loggers.

The Amazon Guardians have been patrolling their territory in the eastern Amazon, which has been heavily invaded by loggers, for several years. Uncontacted members of the Awa tribe also live in the territory.

At least three Guardians have previously been killed, and many of their relatives have also been killed as loggers and land grabbers have targeted their territory, known as Arariboia, which is now the last area of forest left in the region.

Earlier this year Paulo Paulino told Survival: “It makes me so mad to see this [forest destruction]! These people think they can come here, into our home, and help themselves to our forest? No. We won’t allow it. We don’t break into their houses and rob them, do we? My blood is boiling. I’m so angry.”

In this video recorded for Survival’s Tribal Voice project, Paulo Paulino (back left) and Tainaky Tenetehar (back right) appeared alongside the Guardians’ coordinator, Olimpio Guajajara, to warn that their lives are at risk.

Sonia Guajajara, head of APIB, the Association of Indigenous Peoples of Brazil, said today: “It’s time to stop this institutionalized genocide! Stop authorizing the bloodshed of our people!” APIB is touring Europe to highlight the racism and genocidal assaults unleashed by President Bolsonaro.

Survival has been supporting the Guardians for many years.

Survival’s Brazil researcher Sarah Shenker, who accompanied the Guardians on one of their operations earlier this year, said today: “Kwahu was completely dedicated to defending his forest and his uncontacted relatives, despite the risks. He was also one of the most humble people I’ve ever met.

“He knew that he might pay with his life, but he saw no alternative, as the authorities did nothing to protect the forest and uphold the rule of law.

“This is the reality of life for many of Brazil’s indigenous people and it has got much worse under President Bolsonaro. He encourages the loggers and land grabbers, and strips the forest’s defenders of protection, leaving them at the mercy of heavily armed and utterly ruthless logging mafias.

“But the Guardians won’t give up, and nor will their allies. If President Bolsonaro thinks this kind of brutality will win, he’s very much mistaken.”

- Survival’s Brazil Researcher Sarah Shenker, who knew Kwahu well and has been on patrol with the Guardians, is available for interview.

- A team from FUNAI, Brazil’s Indigenous Affairs Department, and the police, have been dispatched to the forest to find Kwahu’s body. There is no independent confirmation of the murder, but it has been widely reported in Brazil, and Survival has spoken to the Guardians caught up in the loggers’ ambush who have confirmed the facts.